Remote work team collaboration: at the beach in 1870

Remote work team collaboration: at the beach in 1870

How to collaborate effectively if your team is remote? Our advice is simple:

However, while we have a wealth of collaboration technology at our fingertips today, remote communication looked very different 150 years ago...

In 1870, a tranquil valley in Cornwall (UK) named Porthcurno was home to the world’s first ever remote work team collaboration tool: the international telegraph cable.

Dubbed the ‘Victorian Internet’, this undersea communication tool enabled Britain to work remotely with its far-away colonies across the British empire. For this reason, Ian Tawanda Mugowa has critiqued the technology’s historical role as ‘a tool of imperialism’.

In the early 20th century, this Cornish hamlet also became an important hub for wireless communications, which were critical in World War II, and eventually undersea fibre optic cables. 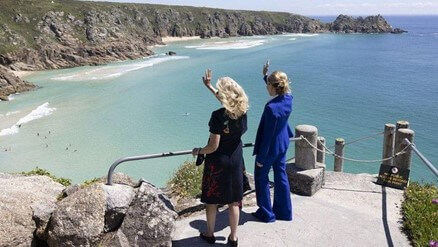 The world’s eyes were on Porthcurno in June 2021 due to Dr. Jill Biden and Carrie Johnson’s visit, as part of the G7 world leaders’ conference.

Earlier in the summer, I was lucky enough to spend some time in the picturesque valley of Porthcurno, the home of the telegraph station. The popular holiday spot is typically known for its stunning Minack Theatre and Logan Rock. The website for the PK: Porthcurno – Museum of Global Communications beckons visitors to ‘come and discover the amazing story of our connected world in the place where it all started.’

Looking out over the idyllic ocean scene, with Logan’s Rock jutting out into the water, the remote valley felt timeless and mesmerizingly still. Porthcurno was perhaps not the most obvious setting for a hub of global communications; even my iPhone could not get any signal or 4G data! And yet, as I delved further into the valley’s histories and secrets, I discovered its importance for international communications of the past, present and future.

On June 7th, 1870, the world’s first international telegraph cable was brought ashore at the cove of Porthcurno. This mission, directed by a Scottish entrepreneur named John Pender, would soon allow for communication to India. Then, later, to other parts of the British Empire. From 1870 – 1970, Porthcurno was the global hub of international cable communications with 14 cables in operation.

From Cornwall to India: the first remote team collaboration

On the night of 23rd June, 1870, the first international telegraphic messages were sent from Porthcurno to Mumbai (then Bombay). A reply was received in five minutes – an impressive technological feat at the time.

The first message read: 'Anderson to Stacey: How are you all?'. The reply was: 'All well'.

In 1872, Pender formed the Eastern Telegraph Company, which became the world’s largest cable-operating company. According to the Museum, ‘Porthcurno became not just the hub of communication for this country but the hub for the British Empire and – in time – the most important telegraph station in the world.’

People from all over the world came to Cornwall to be trained. […] the name Porthcurno was identified with excellence and expertise in international communication.

The first wireless messages: from Cornwall (UK) to Newfoundland (Canada)

In December 1901, a young Italian named Guglielmo Marconi arrived in Cornwall, at the Lizard Peninsula, with a radical new invention. This was the dawn of the wireless! This competitor technology, which posed a commercial threat to the cable industry, spread fear throughout the community of Porthcurno.

Marconi’s wireless communication could send messages across the Atlantic via electromagnetic waves without the need for an undersea cable. Via the dots and dashes of Morse code, he sent messages through the air from Poldhu, in the Lizard Peninsula, to St John’s in Newfoundland in Canada.

As this radio technology became more advanced, the leaders of the cable communications industry in Porthcurno had to adapt. In 1934, the Cable and Wireless Limited company was established, which offered both cable and wireless technology.

Lucy Coyne, a citizen curator for Porthcurno’s Museum of Global Communications, states that ‘Porthcurno played an extremely critical role in the exchanging of messages’ throughout the dark years of World War II. It carried approximately 70% of all communications between the UK and its allies.

Given that PK (the telegraphic codename for Porthcurno) was highly vulnerable to attack, the government installed high security in the village. Only those with a ‘Porthcurno Pass’ could move freely in and out of the valley. Tunnels were constructed into the cliffs, critical operations were moved underground and a bunker was opened in May 1941.

The museum claims that the Cable & Wireless company ‘operated very much as another branch of the armed forces during the war, providing and maintaining communication links throughout.’ In 1944, 705,000,000 words were sent over Porthcurno cables!

1966: from wireless to optical fibre systems

In 1966 a new scientific discovery changed remote work team collaboration forever. Charles Kao, a Chinese-born British-American physicist proved that light waves could transmit signals down pure glass fibres. When the semiconductor laser was invented, the optical fibre and the laser became the foundation of optical fibre communication systems. This was a key discovery that would eventually pave the way for the development of the internet. With the arrival of optical fibre technology, undersea cable and wireless communications in Porthcurno ceased in 1970.

In 1988, cable operations ultimately resumed in Porthcurno as a new cable station was developed in Skewjack. Today, there are six fibre optic cables that come ashore at Porthcurno. The most recent one delivered Superfast Broadband to the Isles of Scilly in 2014.

Building on this incredible history of remote work team collaboration, Ideagen’s leading document collaboration software is changing the way that people work across continents in 2021 - 2022.

Ideagen’s PleaseReview software is a next-generation collaboration tool for working remotely on large and complex documents. It delivers real-time collaboration on document reviews, co-authoring and redaction for users in highly regulated industries. These include life science, defense, government, engineering and construction.

With its intuitive design and multiple control features, PleaseReview helps users to overcome the difficulties that they face on a daily basis with regard to collaboratively writing, reviewing and editing documents. This simple and intuitive software has been proven to reduce document review cycles by 65% and cut costs by 35% on average.

While the Victorians in Porthcurno had to defend their undersea cables from physical threats and damage, today’s cyber security threats are much more insidious and complex.

Ideagen’s PleaseReview software enables you to collaborate securely and seamlessly with your colleagues, wherever they are in the world. With robust security, the software defends you from sensitive data breaches so that your teams can feel empowered to work anywhere.

The history of communications is much older than the Victorian times!

To delve even deeper into the past, and learn about our software’s fascinating lineage, discover our interactive journey through communication technology.

After completing a PhD in French literature and film at the University of Bristol (UK), Nicola turned her passion for research and writing into a software marketing career! She currently specialises in PleaseReview, a collaboration solution for real-time document reviews that is loved by medical writers across the globe. When she's not working, she enjoys hiking, going to festivals and travelling. Connect with her on LinkedIn to get her latest blogs on all things medical writing, drug development and clinical trials.

From start to finish, a single document could pass through dozens of people, several teams and even a few time zones. A lot could go wrong on that journey if you do not have a secure document collaboration system. ‘Secure’ means that the quality a...

How virtual document collaboration is becoming the new norm

Collaboration lies at the heart of any successful organisation. In particular, virtual document collaboration has allowed individuals to constructively contribute their knowledge and expertise to work through the challenges presen...