How could the ‘Build Back Greener’ plan affect energy industry regulations?

In response to the government’s proposed ‘Build Back Greener’ plan, our HSE Content Consultant, Kim Everitt, provides insight into the future of energy industry regulations.

The government has recently announced plans for the UK to become a ‘world leader’ in green energy by working towards net-zero emissions by 2050. However, given the size of infrastructure that would be required, how could it alter energy sector regulations?

What is the ‘Build Back Greener’ plan?

‘Build Back Greener’ is part of the Prime Minister’s ten-point plan aiming to make the UK a world leader in clean wind energy which has the intention of creating jobs, slashing carbon emissions and boosting exports.

In order for this to be achieved, £160 million will be made available for the upgrade of infrastructure to substantially increase our offshore wind capacity in areas such as Northern England, Scotland and Wales. This forms part of the £557 million pledged by the government in 2018 and we may see more investment being made available in the future. The UK currently has the largest wind capacity in the world and currently meets 10% of our electricity demand.

The three key commitments for the green energy plans include the following:

Offshore will produce enough energy to power every home in the UK by 2030 which boosts the government’s previous 30GW target to 40GW.

A new target for floating offshore wind to deliver 1GW of energy by 2030 – over 15 times the current volumes worldwide. This builds on the strengths of the North Sea, allowing wind farms to be built in deeper waters which further boosts capacity where winds are strongest.

Setting a target to support up to double the capacity of renewable energy in the next ‘Contracts for Difference’ auction – providing enough clean, low energy to power up to 10 million homes.

The rest of the plan will be outlined in due course.

How could these plans affect energy industry regulations?

Whilst the ‘Build Back Greener’ plans sound both positive and ambitious in equal measure, what could it mean for regulations within the energy sector? Our HSE Content Consultant’ Kim Everitt, provides her insight into what energy regulation amendments could be made in the future:

”With such an ambitious goal being set by the government, I think it’s fair to say that we can expect to see many changes to legislation - both short and long-term in relation to achieving net-zero carbon emissions by 2050. Just recently we heard of the government’s plan to set long and interim targets in four key areas in their ‘Environmental Bill’. This will enhance progress already made through the government’s ‘25 Year Environmental Plan’ and ensure commitment to ‘Build Back Greener’ by current and future governments. The proposed targets from this are expected to enter public consultation in early 2022.

The Climate Change Act 2008 has already been amended in 2019 to reflect the new 100% reduction target for 2050 and we await to hear the final details and launch of UK ETS (Emissions Trading Scheme) set to run from 2021 following Brexit to replace the EU ETS scheme. However, trading within EU ETS may still be permitted if mutually beneficial, either way, I believe it is safe to assume carbon prices/tax will continue to increase in order to keep the pressure on industries to reduce emissions in line with targets.

We can see how green energy targets directly affect the energy industry, but what about the effects of indirect legislation? With energy-intensive industries (particularly production) being put under increasing pressure through legislation to modernise and become leaner, greener, energy-efficient machines; and both current and potential building regulation changes for greener homes and buildings; what risks and opportunities could this present to the energy sector? It’s certainly something I would be considering in discussion about mid to long-term future-proofing.”

Which other countries/states have taken a green energy response?

In response to the 2015 Paris Agreement in reaching zero emissions in the second half of the century, the following countries have also responded: 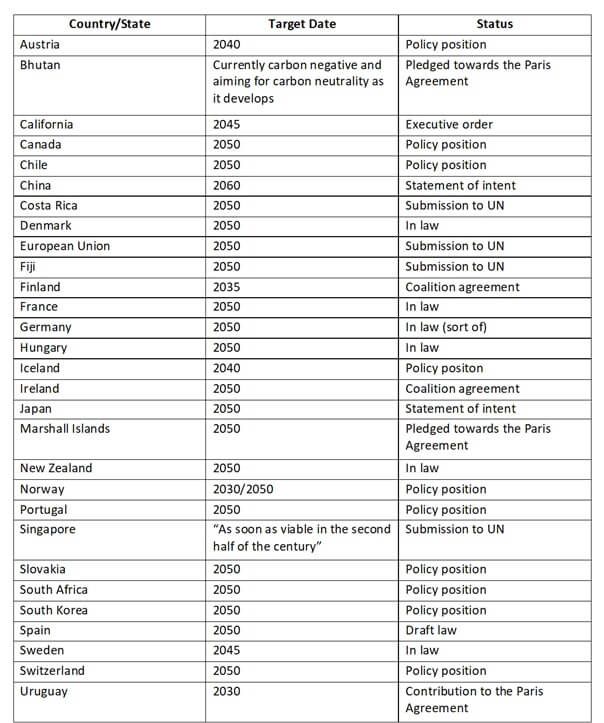 What is wind power generation?

Wind power generation is essentially a form of solar energy. The uneven heating of the earth creates warm air that rises and cold air that sinks and moves into its place – this is what we know as ‘wind’. The wind’s natural energy can then be turned into electricity using ‘wind turbines’ that are grouped together in ‘wind farms’ and can be placed both inland and off the coast of the UK.

Due to the use of a natural source, wind power generation has grown substantially over the past decade in the UK. According to TheSwitch in 2017, 15% of the UK’s entire electricity was generated by wind power which is enough to power 12.7 million homes across the country. For this reason, it makes wind our primary source of renewable energy in Britain.

For all wind turbines, however, the following criteria must be adhered to:

How can Ideagen assist the energy sector?

Our energy risk management software ensures that your business adheres to operational standards that are specialised in the energy sector. Our software offers the following criteria:

Find out more about how our energy software solutions can assist in changes to industry regulations and ensure that you adhere to them.  We will continue to keep you informed as the ‘Build Back Greener’ plan continues to develop.

As Ideagen’s Content Marketing Executive, James is primarily focussed on manufacturing and keeping individuals in this sector informed of the latest regulatory news and trends. He comes from a marketing background and is passionate about creating engaging content that answers questions relating to software solutions and regulatory changes.