Since the new Clinical Trial Information System (CTIS) was introduced on 31 January 2022, the number of clinical trial applications (CTAs) has steadily grown over six months. While nine applications were received in the first month, July saw a record number of 58 submissions, which is a marked increase on June’s total of 39. 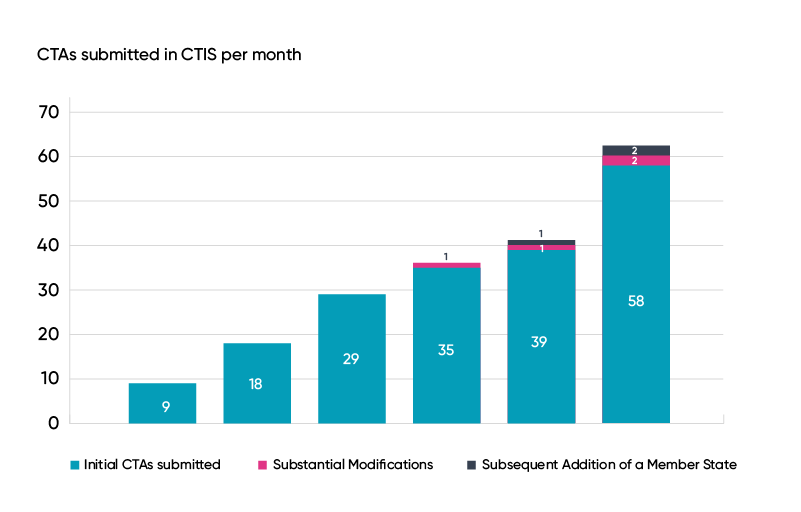 When will the CTIS replace EudraCT?

While use of the CTIS is not yet mandatory for clinical trial sponsors, the system will officially replace the EudraCT portal in January 2023. Sponsors will be obliged to use the CTIS to apply for authorisation to run a clinical trial.

Of the 195 CTAs submitted to the CTIS, 188 are initial clinical trial applications, four are substantial modification applications and three include substantial additions from concerned Member States.

What is the EU CTIS for?

In simple terms, the CTIS was developed so that sponsors could use apply to run simultaneous clinical trials throughout the European Union using the same documentation. Clinical trial sponsors can apply for clinical trial authorisation for up to 30 European countries with one application

Who does it apply to?

The CTR will apply to all clinical trials that are conducted within the European Union.

The CTR will not apply in the UK and it remains to be seen whether the UK will elect to align its legislation with the CTR. In any event, the UK will not be able to benefit from the advantages of being part of the CTIS.

What are the benefits of using the CTIS?

According to EMA, sponsors should submit their applications to the new portal for four key benefits:

Decisions made on CTIS applications since January

What are the main therapeutic areas so far?

The following areas have had decisions issued by the CTIS since 31 January:

According to the draft guidance from the EMA, medical writers ‘can play an important role in reducing the need for redactions’ in documentation submitted to the CTIS. They request that sponsors make documents as transparent and accessible as possible, even if this means publication is deferred.

Guidance from the EMA states that ‘[i]t is expected that embedding a CCI identification and tracing strategy during the writing of the CTIS related documentation would limit the unnecessary dissemination of commercially confidential information in documents where these pieces of information are not essential, required or relevant.’

The EMA suggests that ‘the sponsors and marketing authorisation applicants/holders consider identifying early during the development plan those pieces of information which are considered CCI, track these as the product evolves and proactively minimise the distribution of these pieces of information across the clinical trial documentation already when the documents are written.’

The tracing strategy can be further complemented by employing document templates which specifically indicate which information is required to be included in the documents according to the clinical trial legislation, scientific guidelines and regulatory guidance.

As a complementary approach, tagging those pieces of information which are considered CCI at the time the clinical trial documents are written would facilitate the preparation of the document versions meant to be published.

It is envisaged that implementing such approaches would reduce the efforts entailed by preparing  separate document versions for publication purposes and it would allow the CTIS users to publish in higher proportion the very same documents which were submitted for scientific evaluation.

How technology can help

While preparing documents for the CTIS with transparency and disclosure requirements in mind is a time-consuming and costly process, Ideagen’s PleaseReview software can help streamline the entire process from start to finish.

Read how UniQure created a structured and consistent process for document development with PleaseReview.

After completing a PhD in French literature and film at the University of Bristol (UK), Nicola turned her passion for research and writing into a software marketing career! She currently specialises in PleaseReview, a collaboration solution for real-time document reviews that is loved by medical writers across the globe. When she's not working, she enjoys hiking, going to festivals and travelling. Connect with her on LinkedIn to get her latest blogs on all things medical writing, drug development and clinical trials.